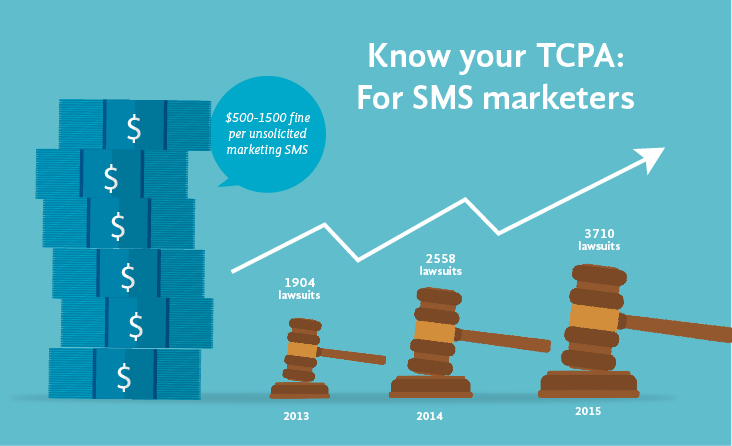 What could be the reason for this spike in TCPA litigation figures?

between 2007 and 2016, quite a lot of technological advancements occurred in the field of mobile technology.

When the TCPA was first implemented in1991, it was actually only marketing calls that were made without the prior consent of the receiver that were included in the TCPA regulations.

But as technology developed, specialists at the Federal Communications Commission continued to review the TCPA statutes to make them correlate with current digital trends.

In 2007, texting was not as rampant as it is today, and phones were a lot less accessible to the general population.

that may have contributed immensely to the steep rise of TCPA violation cases in courts in the United States is the fact that TCPA cases are usually outliers when compared to most other cases relating to statutory damages in courts.

Normally, when people want to claim damages in courts, they usually have to prove that the defendant committed an offense that caused harm to them to the tune of the number of damages they want to collect.

This is not the case in the field of TCPA litigation.

As defined by the statutes, once a mobile subscriber receives marketing calls or text messages from a brand that such a person hasn’t given prior written consent to, then such an erring marketer is liable to pay statutory damages to the tune of between $500 and $1500 per message sent to the aggrieved recipient of the unwanted messages.

The fact that people can just collect money from brands in the form of statutory damages and the fact that they do not have to prove that any actual damage was done asides the fact that they received these messages is a very powerful driving force pushing the amounts of TCPA-related litigations upwards.

The statutory damages paid to these people serve as a sort of incentive for them to sacrifice their time and energies to pursue these litigations and bring erring marketers to justice.

When viewed closely, the TCPA is almost a self-enforcing regulatory mechanism. If the marketer screws up by sending messages to a recipient without express permission, the aggrieved recipient marches to court to collect his $500. This keeps digital advertisers in the field of SMS marketing on their toes.

TCPA litigations are not usually as simple as described above though.

In a lot of cases over the years, class-action cases have been formed against erring brands sending advertisements through SMS to recipients without having express permission to do so.

This means that, on quite a number of occasions, plaintiffs, consisting of aggrieved customers, hire a common attorney or groups of attorneys to drag a particular offending brand to court.

In the course of the litigation, more aggrieved recipients of that particular brand’s recurrent text messages may show up, and in the end, the case blows up to become a very serious case, with involving statutory damages running into millions of dollars. In some cases, the offending brand goes to court and can prove some of the consumers wrong by bringing forward authentic proofs of consent. At that point, the fact that these recipients who actually consented to receive the brand’s text messages have turned against the brand and gone to court without any official revocation of their consent means that they are not interested in the brand’s messages anymore. Such an action by these customers should be treated as a revocation of consent by the brand.

In some other cases where the brand is completely guilty and still goes ahead to argue the case, if the court finds it guilty of the charges against it, it may have to pay all the statutory damages to the aggrieved consumer. There is a little hope here for the brand though. The FCC has set the maximum amount that can be paid in damages by a brand in a TCPA litigation as $10million. Therefore, the maximum the brand can incur in statutory damages is $10million.

In most cases, however, when the brand checks it’s records and finds itself guilty, it usually reaches out to the aggrieved consumers or their attorneys and tries to initiate a resolution of the case outside the court. If an agreement is reached between both parties, the brand pays the aggrieved recipients a sum.